Aim Those Fireworks Over Open Land – Not Water 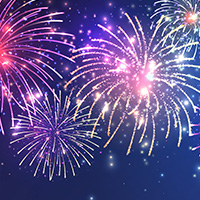 This weekend, the sights and sounds of our nation’s annual Independence Day will fill the air. Fireworks are a long tradition and we love them. It’s just important to remember that the colors of fireworks are created by chemicals that can pollute the air and water. Some communities have moved their fireworks displays to show over – and fall into – water to reduce the risk of fire. This, of course, increases a plethora of fireworks pollutants in water. A recent study found ammonium perchlorate concentrations (an inorganic chemical used in fireworks and other explosives) in a municipal lake located next to a fireworks show spiked 14 hours afterwards, reaching levels from 24 to 1028 times the mean baseline value.

Ammonium perchlorate is known to contaminate ground and surface waters and can harm the aquatic creatures residing in the lake. Copper compounds, sulfur dioxide, lead nitrate and lead chloride are also released when fireworks are let off and can be a hazard to the environment if released in mass amounts. Bottom line, it’s better for water bodies if fewer fireworks are set off above and around them.