Last month, a “bomb cyclone” swept the Midwest, which meant heavy rainfall and rapid snowmelt leading to catastrophic flooding across the Missouri river basin. Three-fourths of Nebraska’s 93 counties declared emergencies. According to the Associated Press, the cost of the damage surpassed $1.3 billion – $449 million in damage to roads, levees and infrastructure, $440 million in crop losses and $400 million in cattle losses.

More than 2,000 homes and 340 businesses were damaged or destroyed by the flood and some cities and towns are still without drinkable public water. 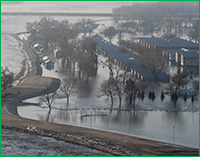 We asked Duane Grashorn, Region Manager of Nebraska, to give us his perspective from the frontline there.

We got lucky. For the amount of flood water we saw in Nebraska, there was very little damage to facilities or essential operations in the communities we serve. The biggest problem was the amount of mud and grit that got flushed into the sewer systems. We are telescoping and cleaning sewers to bring those systems back to optimum capacity and effectiveness.

When the flooding hit the area, we didn’t know what we were up against. There was a lot of inspection and assessment to be done, and we were challenged by roads that had been either washed-out or flooded. This prevented us from accessing facilities as quickly as we would have liked, but that is the nature of an emergency. 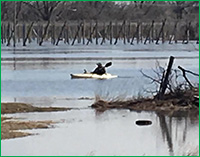 Nebraska is a state of many lake communities. We are fortunate to manage the water and wastewater services for many – and many were affected by the floods.

In Buccaneer Bay, the road that leads to the sewer plant was underwater. We were receiving alarms from the plant that needed to be answered at the plant. So our operator borrowed a kayak and paddled to the facility to assess the situation. Talk about dedication – and it isn’t unusual.

This same response took place in several places where the roads had been either washed out or were submerged. Local townspeople helped ferry emergency workers and staff to where they needed to be to do their work.

In Treasure Valley, the pump station took on a lot of mud, and the generator was sitting in a foot of water. Fortunately, inspections revealed no damage to the pump or facilities, but of course, there was a lot of cleanup to be done. Hanson’s Lake is a community where each home has its own grinder pump. The flooding knocked out power at the plant, but this actually worked to our benefit as overflow sewage didn’t end up getting processed through. We pretty readily got the plant up and running again without damage to the plant.

In Riverside, flood waters came up to the walls of the treatment facility but didn’t do any damage. The issue was that the roads washed out, so getting to and from the plant was difficult. The people of Riverside were great. Citizens with airboats ferried our people and other emergency staff around. Thanks to these efforts, we were able to get the city back online quickly.

In North Bend, all of the city’s sewer lines drain through to the sewer plant, so when we knew flooding was imminent, we had a diesel pump staged and ready to go to avoid loss of pumping. This worked very well and helped us avert the problems that might have occurred. Sadly, the flood waters were so high they submerged many of the residents’ water meters – and they’re not waterproof, so these will need to be replaced.

In Woodcliff, the power went out. When that happens, the treatment plants go offline and it takes a little longer to bring them back online, due to the required amount of water testing and sampling you have to do to assure water safety. We were lucky that the facilities sustained little damage, and we got the water and wastewater systems up and running quickly.

In the end, the infrastructure we manage and the preventive measures we’ve put in place stood up well to the effects of the Bomb Cyclone. Our plants are online and functioning. Of course, there were a few tense minutes, and we feel deeply for the people of the communities we serve. Our plants are operational and the mud has been cleared, but for many, dealing with the damage, muck and so much loss will affect their lives for years to come.