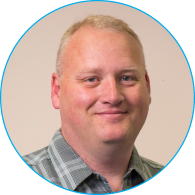 Committed to Education, Opportunity and Growth

This November, Paul Christensen will celebrate twenty-five years working in the water and wastewater industry. In 1992, Paul graduated from St. Cloud Technical & Community College, got married and began his career with PeopleService in the city of Lester Prairie, Minnesota. Joining the company as an entry-level worker fresh out of college, Paul spent eight years in Lester Prairie, distinguishing himself as a dedicated worker and serious advocate for his industry. In 2001, Paul’s commitment was rewarded as PeopleService promoted him to region manager.

Paul knows what he does makes a difference in people’s lives and is a fierce supporter of education and training programs. He maintains close ties with St. Cloud Technical & Community College and is chair of the advisory committee to the college’s Water Environment Technologies program.

“This program is important to me. It was instrumental to my career path,” said Paul. “Our industry is growing and the need for qualified operators is substantial. I am always on the hunt for new prospects. PeopleService is a place where employees make a difference. I have a great respect for what we accomplish in the field and I want to see others experience the same success I experience working for PeopleService. When I invest in the future of others, that investment is realized in a stronger work force, and that benefits the entire water and wastewater industry.”

Career and family are both an important part of who Paul is. He and his wife enjoy spending time together visiting wineries and getting out on the road in his classic 1951 Willys Overland Jeepster. Together, they have raised two daughters.

An avid hunter and fisher, Paul says one of the family traditions he cherishes most is hunting with his mother and brother during the annual opening of deer season on the family property located by the sparkling headwaters of Minnesota’s Tibbetts Brook, where his grandparents originally homesteaded. “The three of us have been making that same hunting trip for the past thirty years,” said Paul.

Twenty-five years with PeopleService, thirty years hunting with his mother and brother… proving that whatever Paul chooses to do, he is committed to 100 percent.